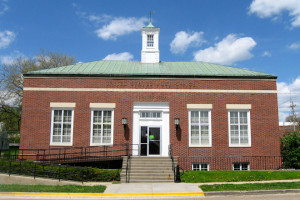 “In September 1937, the Adams County Free Press reported Corning was one of nine towns in the state to receive funds for a new Post Office building as part of a ‘seventy million dollar emergency construction fund authorized by Congress’ as part of the Works Project Administration. Postmaster A. C. Peterson received information from the United States Treasury on how to proceed in plans for the Post Office, which would be opened for bidding October 4 that year.

“The contract was awarded to the Church Company in Kansas City, and construction on the $75,000 building began in early 1938. Prior to its opening, a Free Press reporter highlighted key interior features in the new building, including Tennessee granite in the lobby, red birch woodwork, service windows titled in gold leaf outlined in black, and bronze lighting fixtures. The new Corning Post Office was officially dedicated June 15, 1938.” (iowabackroads.com)

We welcome contributions of additional information on any New Deal project site.

SUBMIT MORE INFORMATION OR PHOTOGRAPHS FOR THIS SITE

This site uses Akismet to reduce spam. Learn how your comment data is processed.