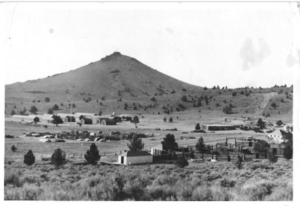 In the  winter of 1935, members of Civilian Conservation Corps (CCC) #1629 began construction of camp administrative and barracks buildings near Squaw Butte to facilitate CCC work related to the 16,000 acre Squaw Butte Federal Experimental Range Station. Today some of those building survive to support work at the North Great Basin Experimental Range Station and continued research on the ecology and  management of rangelands.

CCC Company #2504 arrived in October 1936 to further the work associated with the Squaw Butte Experiment Station and its efforts to improve grazing conditions in this very dry, sagebrush area of Harney County, Oregon. The federal Taylor Grazing Act of 1934 had brought Western public domain lands together in an effort to stabilize the livestock industry and improve range lands. This required research. The state of Oregon’s response to such needs involved setting aside funding to develop, with the Grazing Service of the US Department of Interior, a range and livestock experiment station near Burns, Oregon.

CCC Camp Squaw Butte operated from 1935 through 1941. During that time, CCC enrollees built more than 60 miles of fencing and approximately 30-40 miles of road. During the six year period that the CCC contributed to the mission of the Squaw Butte Experiment Station, the efforts made to improve grazing and livestock production were described as unique and “calculated to work toward improved range practices in five of the western range states”(Burns Times-Herald).

We welcome contributions of additional information on any New Deal project site.

SUBMIT MORE INFORMATION OR PHOTOGRAPHS FOR THIS SITE

Location notes: Thirty-seven miles west of Burns, the camp was situated 4 miles south of Highway 20 on Squaw Butte Road. Many of the CCC Camp buildings are currently being used for administration of the North Great Basin Range.

This site uses Akismet to reduce spam. Learn how your comment data is processed.